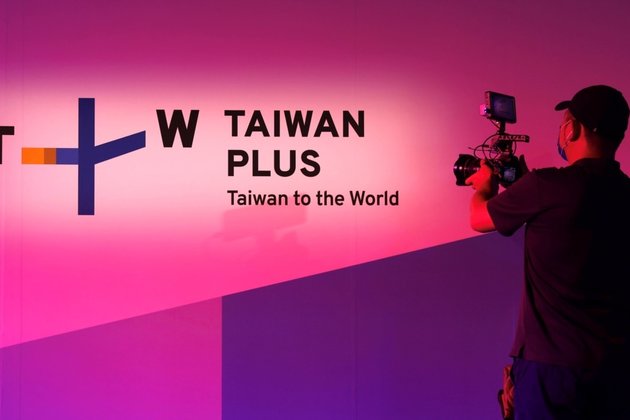 It may be a relative newcomer to Taiwan's media scene, but broadcaster TaiwanPlus has quickly established itself as a voice for the island.

The state-affiliated broadcaster launched nearly 18 months ago and is already "filling the blank" for credible English-language content for Taiwan, analysts say.

Its arrival comes as China is pushing its influence into Taiwan's media environment.

Starting as an online streaming platform - publishing news on a website, a news app and via social media - TaiwanPlus has seen quick success, attracting over half a million social media followers and at least 36 million video views online since its launch in August 2021.

"TaiwanPlus is aiming to be a world-class media outfit that has a large international reach. We do look at other big-name media outfits that aspire to be as good or better in terms of content we provide and the fairness of our reporting," Ryan said. "And I actually think we're doing such a really good job for such a young media outfit. The quality of our reporting is really good."

With Taiwan around 180 kilometers from China's coast, coverage of the island tends to focus on tensions with Beijing, including military drills, political statements and even drone incursions.

Beijing insists Taiwan is a breakaway province that will one day be reunified with China. But Taiwan is a self-ruled democracy with its own constitution, armed forces, currency and democratically elected leaders.

"The biggest stories are definitely military pieces, Taiwan security, anything related to China," he said.

But stories about Taiwan's LGBTQ community, the passing of same-sex marriage laws and news about Hong Kong have also sparked the interest of audiences.

"A lot of the times when you see stories in the past about Taiwan it's been international outfits that focus on stories that have a China connection, which is an extremely important part of the story, but it's not the only story," Ryan said.

Overseen by Taiwan's Ministry of Culture, the broadcaster was launched with a budget of approximately $200 million for four years.

Despite being government-funded, Ryan dismissed any concerns over political influence.

"The editorial independence was baked into the bid process. There was a clause in that process that made it clear upfront that whoever bid for it would have to abide by that rule," Ryan said.

That independence, says Ryan, "is really important, and kind of underlines everything we do."

It's a distinction not lost on the broadcaster's audience.

"There was a lot of concern among viewers that we would be promotional or a mouthpiece for the government. Those voices died down after a little while, after they viewed our reporting to see that it's fair," Ryan said.

"The press environment is free from the government, but the mainstream media in the majority belong to a small number of corporations which use this media for their own benefit," Alviani said, adding that it often appears as support for one of the two major political parties in Taiwan.

"Political polarization is the major problem in the Taiwan media," he added.

But Alviani believes the presence of an English-language broadcaster is crucial for Taiwan's international voice.

"TaiwanPlus is actually very important because the world needs to know, in English, what is Taiwan, what is happening in Taiwan, and they need a set of independent information that is collected by journalists," he said. "TaiwanPlus is filling the blank because before, there was not such media in Taiwan."

Access to independent and credible news is important as Beijing steps up its extensive influence into the Taiwan media landscape.

"Among the 30 countries we examined, mostly democracies, we found that Taiwan faced the most intense campaign of media influence from Beijing but also demonstrated the strongest degree of response and resilience," Sarah Cook, Freedom House research director for China, Hong Kong and Taiwan, told VOA via email.

Perhaps unsurprisingly, the TaiwanPlus smartphone app is banned in China.

But, Ryan said, TaiwanPlus is just focusing on reporting rather than combating propaganda from Beijing.

"We're a news organization, not a PR outfit. We don't look specifically at how Chinese media are covering stories and try to counter that. Our focus is to report on the most important stories, to do it well and to do it with a Taiwan perspective," he said.

The media outlet however is preparing in case of attempts to disrupt its broadcasts.

Beijing continues to send warplanes into Taiwan's Air Defense Identification Zone, and recently conducted military drills around the island as a warning.

Western governments and global analysts have expressed heightened concern that China may launch a military invasion.

For TaiwanPlus, if such a day were to occur, the focus would be keeping the news flowing.

"Taiwan's government considers TaiwanPlus to be critical infrastructure, so our IT department is on high alert to prevent hacking. Like all international media organizations, we have procedures in place to ensure continuity in the event that something would disrupt our broadcasts," Ryan said.

For now, with 140 employees in the Taipei office, and a second office scheduled to open soon, TaiwanPlus is focused on expanding the reach of its content.