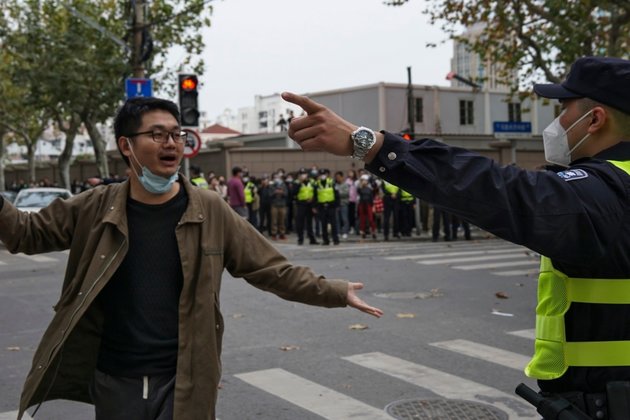 China eased some of its pandemic rules on Monday but affirmed its "zero COVID" strategy even as protests erupted throughout the country against the restrictions, and some demanded the resignation of President Xi Jinping.

Over the weekend, protesters shouted, "Lift the lockdown!" in a city in China's western region, while across the country in Shanghai, the financial center, protesters held up blank sheets of white paper as a quiet show of dissent.

A Shanghai resident told VOA he no longer fears the spread of the epidemic because it has become normalized.

Others in Shanghai chanted, "Xi Jinping! Step down! CCP! Step down!' in referring to the Communist Party. Police detained dozens of protesters, driving them away in police vans and buses, although the exact number was not clear.

Xi's "zero COVID" policy has sharply limited infections through stringent lockdowns that have disrupted everyday life in the country of 1.4 billion people. Protests erupting at locations around the country appears to indicate that many Chinese have grown weary of the lengthy quarantines and widespread testing.

The Beijing city government said Monday it would no longer set up gates to block people from entering apartment compounds where infections have been found. It, however, made no mention of a deadly fire last week in the western Xinjiang region that spawned protests over whether firefighters and victims trying to escape a building were blocked by locked doors and other anti-infection controls.

The government blamed "forces with ulterior motives" for linking the fire to the strict COVID measures.

In addition to easing the rules in Beijing, officials in Guangzhou, the southern manufacturing and trade metropolis that is the biggest hotspot in China's latest wave of infections, said some residents will no longer be required to undergo mass testing.

Urumqi, where the deadly fire occurred, and another city in the Xinjiang region in the northwest, said that markets and other businesses in areas deemed at low risk of infection would reopen this week and public bus service would resume.

The "zero COVID" policy aims to isolate every infected person and has helped China to keep its case numbers, as a percentage of its overall population, lower than those in the United States. As a result, millions of Chinese have been confined to their homes for up to four months.

Despite the protests and relaxation of some rules, the ruling party newspaper People's Daily called for its anti-coronavirus strategy to be carried out effectively, indicating Xi's government has no plans to change course.

'Facts have fully proved that each version of the prevention and control plan has withstood the test of practice,' a People's Daily commentator wrote.

US Reaction to China Lockdowns

The U.S. Mission in China said it has regularly raised concerns with the Chinese government about the COVID restrictions and their effect on Americans living in or visiting the country.

"We encourage all U.S. citizens to keep a 14-day supply of medications, bottled water, and food for yourself and any members of your household," U.S. officials said.

In Washington, the U.S. National Security Council said it supports the right of Chinese people to peacefully protest the COVID restrictions.

(VOA's Mandarin service also contributed to this report. Some material in this report came from The Associated Press and Reuters.)