Demonstrators protesting against COVID-19 restrictions clash with police in Shanghai 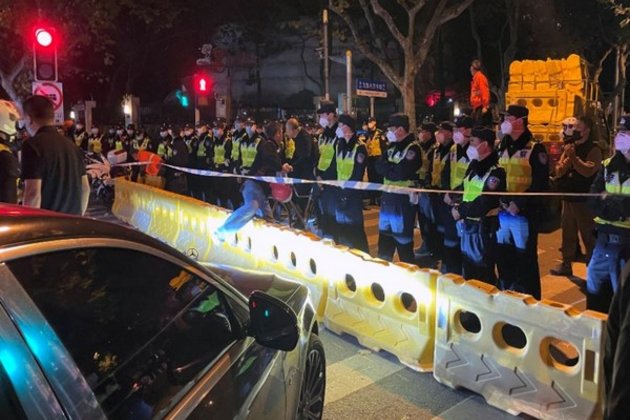 Shanghai [China], November 28 (ANI): Hundreds of demonstrators and police clashed in Shanghai as protests over China's severe COVID-19 restrictions continued into the third day and spread to several other cities.

Angry crowds took to the streets of Shanghai in the early hours of Sunday morning, with protesters calling for an end to lockdowns, as China grapples with mounting public unrest against its zero-Covid policy, reported Al Jazeera.

The latest demonstrations have been unprecedented in mainland China since President Xi Jinping took power a decade ago.

As numbers swelled at demonstrations in multiple major cities over the weekend, so too have the range of grievances voiced - with some calling for greater democracy and freedom, reported CNN.

Hundreds of protesters have even called for the removal of Chinese leader Xi Jinping, who for nearly three years has overseen a strategy of mass-testing, brute-force lockdowns, enforced quarantine and digital tracking that has come at a devastating human and economic cost.

According to various media reports, Chinese police detained two people on Monday at a site in Shanghai where demonstrators gathered over the weekend to protest Covid-19 lockdowns.

Police were also pulling people aside and ordering them to delete photos from their phones.

Large crowds had gathered Sunday in the downtown area, with police clashing with protesters as they tried to stop groups from converging at Wulumuqi street, named after the Mandarin for Urumqi, reported The Star.

Shanghai police had not responded on Monday to repeated enquiries about how many people had been detained.

Roads were closed Sunday night after the protests had been reopened in the morning.

The latest demonstrations -- unprecedented in mainland China since President Xi Jinping took power a decade ago -- began after 10 people were killed in a fire in Urumqi, the capital of the far-western region of Xinjiang, that many of the protesters blame on protracted COVID-19 lockdowns.

The deaths have become a lightning rod for frustrations over Beijing's dogged commitment to zero-COVID and its combination of strict lockdowns, mass testing and tracking that continues to impede people's lives three years after the first cases of the then-unknown virus were detected in the central city of Wuhan, reported Al Jazeera.

In the early hours of Monday in Beijing, two groups of protesters totalling at least 1,000 people gathered along the Chinese capital's Third Ring Road near the Liangma River, refusing to disperse.

Since this weekend's protests, censorship has gone into overdrive on Chinese social media platforms, to stop people from seeing and discussing them.

Tens of millions of posts have been filtered from search results, while media are muting their coverage of Covid-19 in favour of upbeat stories about the World Cup and China's space achievements.

Blanket censorship began with the names of cities and specific streets where demonstrations were staged.

For the past three years, the patience of one billion people in China has been stretched, growing thinner and thinner with every lockdown and round of mass Covid testing. Now, that patience has snapped.

Meanwhile, the blank paper has become the symbol of rare demonstrations. The trend has its roots in the 2020 Hong Kong demonstrations, where locals held blank pieces of paper to protest against the city's draconian new national security laws.

Activists held the paper aloft after authorities banned slogans and phrases associated with the mass protest movement of 2019 that saw the city grind to a halt and officials violently clamp down on demonstrators. (ANI)