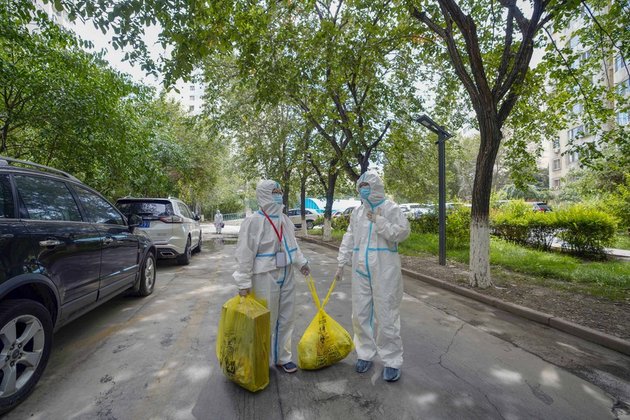 All of the new locally-transmitted cases were reported in Xinjiang Uygur Autonomous Region, the National Health Commission said in its daily report.

Four new imported cases were reported in Shandong, two each in Shanghai, Guangdong and Sichuan, and one in Hebei, the commission said.

One new suspected COVID-19 case, which was imported from outside the mainland, was reported in Shanghai Municipality.

No deaths related to the disease were reported Wednesday.

A total of 56 COVID-19 patients were newly discharged from hospitals after recovery, the commission said.

As of Wednesday, the overall confirmed COVID-19 cases on the mainland had reached 84,756, including 724 patients who were still being treated, with 41 in severe condition.

Altogether 79,398 people had been discharged after recovery, and 4,634 had died of the disease on the mainland, the commission said.

There were still four suspected COVID-19 cases, it added.

According to the commission, 22,498 close contacts were still under medical observation after 1,284 were discharged on Wednesday.

The commission said 295 asymptomatic cases, including 150 from outside the mainland, were still under medical observation.

A total of 3,189 COVID-19 patients in the Hong Kong SAR, 46 in the Macao SAR, and 450 in Taiwan had been discharged from hospitals after recovery. ■

Trump running into legal hurdles over attempt to ban TikTok

WASHINGTON, DC, September 25 (ANI/Sputnik): A U.S. federal judge has ordered the Trump administration to postpone its ban on downloads ...

SYDNEY, NSW, Australia - Stocks in Asia were generally stronger on Friday, at least in Japan and Australia."What we've seen ...

UK restaurants and pubs brace for fallout from new restrictions